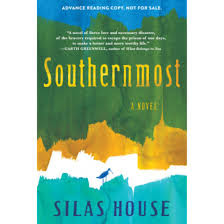 After nearly ten years since the release of his last novel, Silas House returns to the literary scene this summer with Southernmost--Algonquin Books, $26.95--a story of compassion, redemption, and a man standing up for his beliefs in the face of turmoil.

Asher Sharp, a hell-fire and brimstone Pentecostal preacher, and his young son, Justin, desperately fight to save their neighbors as a catastrophic flood devastates his small Tennessee hometown. The raging Cumberland river is literally washing away homes and businesses. Two men, engaged to each other and themselves victims of the flood, join in to help Asher and Justin save more people. When Asher learns the two have also lost their home to the flood, he offers to let them stay at his house with his family.
This decision sets in motion a series of not quite epiphanies, but more awakenings, in Asher and his belief system. As his mind opens and his world becomes larger, he soon realizes that his old way of preaching no longer works for him. Asher immediately feels the resistance to this change in his own family as well as his congregation. When a heart-felt, but ill-planned, sermon given by Asher is videoed and goes viral, he realizes the time for real change has come, whether he is ready or not.
This results in Asher planning what only a few months earlier would have been unthinkable: a not-exactly-legal road trip for him and his son to Key West, Florida. There, Asher hopes to find empathy, acceptance, and understanding for his crisis of faith, to show his son that the world is so much more than what he has been taught so far, and perhaps reconciliation with his older brother who was disowned by the family years ago for being gay.
Silas House is a master of dialogue and description. In fact, the description of driving through Georgia on the way to Florida is so perfect—from the religious billboards lining the interstate to the local roadside gas stations and diners—I feel like House stole the scenes directly from my memories.
The novel is lyrically written with poetic language that allows you to lose yourself in the pages. With his fresh, progressive approach, House is changing what a classic Southern novel looks like.
This is a timeless story of faith and family, as well as a timely tale of justice, equality, and acceptance. While this is a departure from Silas House’s other more Appalachian themed books, it is his best work to date. He captures the essence of the contemporary South beautifully without delving into the typical “grit-lit” that is currently so popular with the region’s authors.  In the years between novels, he has developed into one of the South’s best and bravest storytellers. SOUTHERNMOST is proof of that.
Silas House's first public reading of Southernmost will be June 7th at Lexington's Brier Books at 6:00PM, located at 319 South Ashland Avenue.
To order a copy (even a signed copy if you wish), click here: ORDER SOUTHERNMOST
For more info on the reading, click here:  READING EVENT INFO
For a preview, click here and see a clip of Silas reading from Southernmost. If you have never heard him read, you are in for a treat: VIDEO CLIP OF HOUSE READING
Posted by Keith S. at 3:47:00 PM