The Call of the Wild


Our new President is a reality show star. La La Land just tied a record for the most Academy Award nominations. Big Macs are available in different sizes. Basically, the world is spinning out of control.

What's that, you say? If only we had been given some warning of the craziness ahead in 2017. If only there had been some Universal signs to notice.  Ah, my friends, but we were given a heads up. All we needed to do was look to the Animal Kingdom--the real one, not the one at Disney World that costs like $100 to get in--to see they knew something was amiss.


For centuries, it has been believed animals have a sixth sense in predicting natural disasters. From as early as 373 B.C., historians recorded that animals deserted cities or left for higher grounds days before earthquakes or floods. Relatively few animals were killed in the Great Tsunami in Sri Lanka and India in 2004. They seemed to know what was about to happen and fled well in advance.

Now, you may not think that 2017 is such an out-of-control year. Maybe you like reality show 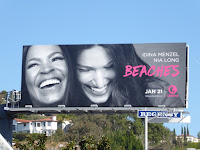 Presidents. Maybe you got jiggy with a mediocre musical movie. You may have always dreamed of an even bigger Big Mac. But, my God, man, LIFETIME REMADE THE MOVIE "BEACHES." Is this the kind of world you think is normal?!

The animals certainly don't think so. As I researched, I could see a trend. As late as September last year, our beastly friends were trying their best to give us a signal to open our eyes to what lay ahead. The methods they chose were a little unorthodox, and we probably wouldn't have paid them any mind, but they still tried. How, you ask? I'll give you three examples:


On Labor Day weekend, Miss Lisa Lobree, was strolling along a park in Philadelphia when, from out of nowhere, a CATFISH falls from the sky and beats her around the head and neck!

“I think it might have [hit my] head, face, and neck because I smelled so bad afterwards. I smelled
disgusting,” said Lisa.

According to the report in the link above (the news video is included in the link), the fish fell from about 50 feet above, measured 18 inches, and weighed about 5 pounds.

I am not an expert on the city of Philly, but I am fairly certain there are not a lot of catfish flying around near the art museum.

When you get hit in the head by a catfish falling out of the sky in a major city, that is a sign of some sort. Just ask Lisa.


Also in September, an Australian bull tried to make humans take notice of the upcoming craziness upon us. He hooked his horn into the feet of the low-flying helicopter, causing the pilot to lose control of the aircraft. The result, as you can see, was a total loss of the copter, while the cow remain perfectly fine. Although the official story in the link above describes the helicopter crash as an accident, who is to say that the bull wasn't desperately trying to get the pilot's attention in order to make him tell the Americans to watch out. I bet the pilot, who survived the crash, may think so.

Finally, the month of September ended with a poor 21-year old feller getting his pecker bitten by a Redback Spider FOR THE SECOND TIME THIS YEAR. This dude works construction, and has to use a porta-potty--which are themselves signs of the End Times, or at least they smell that way--when nature calls on the job.

Being bit one time could easily be chalked up to coincidence or bad luck. I mean, it is totally within my luck parameters to be spider bit on my privates. In fact, I am a bit surprised it hasn't happened to me, yet. But, to be bit a second time, in the same spot, in the same type of bathroom, is too much. THAT
SPIDER WAS TRYING TO WARN US!

"I'm the most unlucky guy in the country at the moment," the victim said. "I was sitting on the toilet doing my business and just felt the sting that I felt the first time. I was like 'I can't believe it's happened again.' I looked down and I've seen a few little legs come from around the rim."

Are you unlucky, sir, or were you chosen by a Charlotte's Web-ish spider, albeit a sadistic one, to spread the message of impending disaster? I think you know the answer. 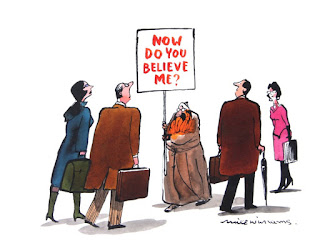 There you have it. The missed signals were given last September by our friends in the wild. Maybe someday we will be wise enough to open our minds and eyes to nature's wisdom, but until that happens, you can find me on my couch watching movies that should have never been remade and eating an extra bigly Big Mac.