Olympics for the Rest of US

"Battle is the most magnificent competition in which a human being can indulge."
-- George C. Patton
I am sure General Patton was talking about war in the above quote, but after clicking on three different links from my Google search for "good competition quotes" I gave up and went with that one. I could have kept looking for just the perfect nugget of wisdom, but I don't have that kind of time, plus I have been invited to have dinner at my sister's house tonight, so I need to get on with this post.

My point is this is not a post about war.  It is about competition. We face competition on a daily basis.  It comes in all shapes and sizes.  It can be as simple as something like who guess the superior weapon in "Rock, Paper, Scissors"--a game that now I am thinking about it isn't all that simple.  I don't recall ever playing "R,P,S" when all players involved did not have to stop and argue over whether Paper was better than Rock or if Scissors were the school-safety kind or the type of shears used on Project Runway.


Sibling rivalry is a great example of a competition that rarely gives the winner any glory at all. In fact, society sometimes even gives the loser sibling sympathy and understanding.  "Well, she would have never turned to prostitution and murder if her younger brother hadn't been so smart and popular at everything he did." It burns me up every time I hear somebody say that. I want to scream that she probably would have done more than both those things, like drugs, grand theft auto, and hunted without a license if it HADN'T been for me trying to encourage her to get clean. (Sorry, Sis)


Perhaps competition at its best happens every four years at the Olympics.  The Olympics are addictive and compelling.  It is the only time we Americans watch sports such as track & field, swimming, & and badminton.  Okay, I still don't watch badminton, but now that players have been thrown out of the competition over some controversy (again, I don't have the kind of time it takes to get you all the details, my sister is fixing meatloaf), I may watch it in Rio in 2016.

The Olympics, however, are for our modern-day gods.  Athletic specimens of rare and beautiful form.  We can't sit on the couch eating our nightly bowl of ice cream watching a man run one hundred meters in three seconds or a lady on a gymnastics mat do a five-rotation twist while putting both legs behind her head and think there is a chance that we could someday do that.  No, sadly, the Games of the Olympiad are out of reach of most of us.


But never fear, I have researched a bit and found three competitions at which some of us could possibly be successful.  They aren't as well-known as the Olympics, but the glory of winning will still be as sweet, and the look of crushing disappointment on your opponent's face will still be as satisfying when you are able to say, "Suck it. I won Gold, loser."


This is a competition I think I would have shot at winning.  I enjoy a nice pickled egg, and quail eggs are small, olive sized bites. The rules are pretty simple: eat as many as you can in one minute, and you must keep them down.  To add to the drama, there is a perennial winner, Lester, who always dominates and holds the record (42).  The classiness of this competition can be summed up with this quote from the Dallas Observer: "The beer-swilling, bargain-hunting crowd got what it came for too, when one of the eaters spewed into a trash can." Watch out Lester, I may be coming for you next year.
Pictures of the spectacle can me found HERE


I don't want to scare anyone away from entering the Stupid Invention Contest, but my friend Rebecca and I have invented a little something we like to call "Tape on a Stick." It is very handy and useful for retrieving things dropped in hard to reach places.  It would totally kick the ass of the stupid invention the 10-year old boy won for in the video above. Totally.

This competition takes place in Helsinki, Finland, giving it international prestige and flair.  The rules are pretty simple--whoever can sit in the sauna the longest wearing only a bathing suit going eight inches down the leg wins. You can wipe sweat from your face but not your body. You cannot cover your ears with your hands. You may not lean over too far. Ambulances will be standing by, if needed. The winning time in 2010 was 12:26 in the 250-degree room.  I am probably going to sit this one out, but I am betting any gay man who has been to a gym in Orlando, New York, or San Fransisco knows a feller who could, and does, sit in a sauna much longer than that most every day.  Just saying.

So there you have it.  Three competitions that you can try if you catch that Olympic spirit this summer.  Would it be easier to just train for a 5K run or a bicycle road race? Sure, but how much cooler would it be to say you were the Pickled Quail Egg Eating Champion?  Booya.  You're welcome. 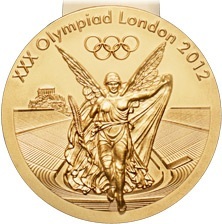 Let me know of more strange competitions in the comments below!
Posted by Keith S. at 7:04:00 PM