My first day in The Big Easy was an eye-opener!  I saw things that not only had I never seen before, but did not know even existed!  Thankfully, I had borrowed a camera from one of the humans, and was able to catch some of the action on film. Like this:

The food and drink were amazing!  While I personally could have done with a little more fresh herbs being added to the seasonings, like arrowroot and sassafras,  I still thought Cajun food was delicious. 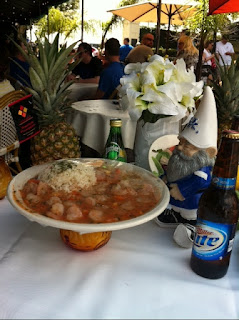 I found a drink named the Hurricane that tasted like fruit-flavored Kool-Aid on steroids.  It was tangy and delicious and made me feel very warm and tingly inside.  Some of the humans said the drink was "too strong" for them, but I told them gnomes had a very high metabolism and we didn't notice things such as that.  Silly humans.  I was able to drink the drink straight down, and insisted on ordering another one.

A little bit after drinking the two Hurricanes, I began to get really warm and talkative.  Everything that was being said seemed so funny to me!  I made several friends at the restaurant we were hanging out in at the time.

These are some of my new friends I made there!

It is a little known fact that gnomes are very musical.  Many times when you think you hear the wind whistling in your yard or garden, it is very likely a gnome.  I am not bragging, but I was named the most musical gnome at the 2009 Roots That Look Like Elvis Convention held at Natural Bridge, Kentucky.  So, naturally, when I saw the band beginning to warm up, I introduced myself as 'Tuck, a gnome from Kentucky, and asked if they minded if I sat in for a song.  The lead singer was bit of diva, I suspect he could already spot my talent and was intimidated by me, but he reluctantly agreed after I led the crowd in a rousing C-A-T-S cheer.

He agreed let me sing one song, so I gave it my all and belted out Elvis Presley's "Kentucky Rain."  A gnome always tells the truth, so believe me when I say I was a big hit!
Being a gifted performer, I know to leave the crowd wanting more, so after my song, I hit the road to sight-see in New Orleans.  Because my legs are six inches long, I decided to take an easier mode of transportation:
This was great! This young human feller drove me all over town, and I was able to see statutes in parks:

And sculptures in museums:

I even tried on a few hairpieces in a wig store.  My Uncle 'Tan, from Montana wears sometimes when he attends the Summer Solstice celebration, but I decided it wasn't the look I was going for here in New Orleans. 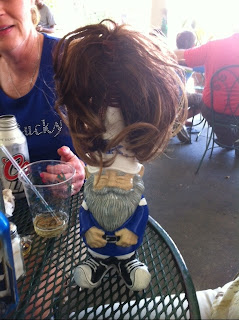 Finally night fell on Bourbon Street, and according to Keith and Andy, it was party time.  I was a little worried about my finances because I had not intended on buying that big sculpture that is pictured above, so I called my cousin, 'Tick, and asked him to wire some money into my account. 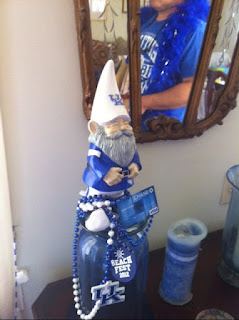 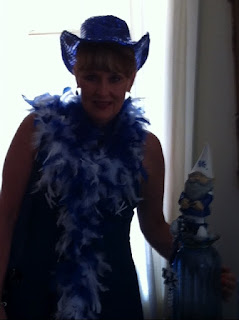 Tick is real good about stuff like that.  He said he would do it right away, so I threw on my beads and headed out to Bourbon Street.  I was hoping I could find some other gnomes who had made their way to the Big Easy for the Final Four.  Now that I had some cash coming from 'Tick, I could afford to live it up tonight!
Posted by Keith S. at 11:42:00 PM