We now join 'Tuck as he continues to journal his trip to New Orleans...

Last night was amazing!  I would rank it as one of the most fun evenings of my life!  It was even more fun than when my cousin Tick and I met those two twin gnomes from Georgia.  But, I am not one to kiss and tell.  I am a Southern GentleGnome.  I will, however,  show you a few pictures of my evening:


I will allow this much, I met a nice young gnome from Kansas, named Sassy.  She was just splendid.  We both loved petunias and zinnias, and both hated crabgrass and poison ivy.  We eventually slipped away from the humans we were with and walked down to the Mississippi River for some alone time.  I guess time slipped away, and the next thing I know, we are watching the sun rise over the water!

Here is a picture of me trying to sneak back into the apartment without waking up Keith or Andy:

Of course, it didn't work.  Gnomes are generally morning people, and as soon as I saw the sun hitting the flowers of the front terrace, I began singing, "Rise and Shine, and give God your glory glory!" which completely blew my cover.

I was then bombarded with question after question by the humans about where I had been and who I had been with.  Finally I told them I would tell them all over breakfast, so we headed out for beignets and coffee from Cafe Du Monde:


I was feeling great after my wonderful evening with Sassy, so I decided to head to the free concert in the waterfront park.  70's super group Blondie was performing and I am a big fan.  There were lots of people there, but I tend to make friends fairly easy, so I was having a great time.  The only problem was the extreme heat.  It was hot as the blazes of a campfire out there! I still managed to make a few friends, people in New Orleans were friendly! 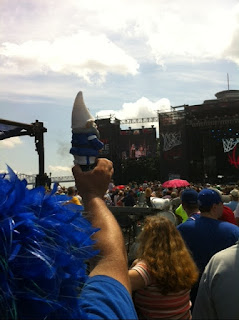 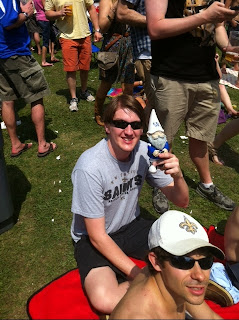 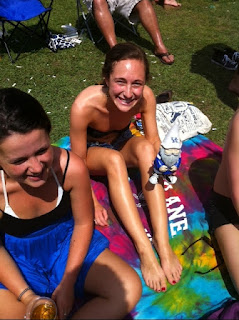 When Blondie sang "Call Me" I just couldn't stand it anymore, I had to bust a move:
After all that dancing, I waved over the refreshments lady, and asked for a sip or two out of her bucket.  I am not sure what was in it, but it made me feel awfully good.  So good, in fact, I decided I would rush the stage and touch Deborah Harry, the lead singer of Blondie.  That turned out not to be such a good idea, as you can see from this picture: 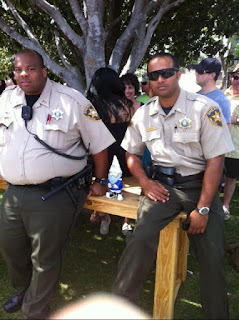 Furthermore, telling the police I would climb all over them like kudzu climbs a light pole probably wasn't the best idea either: 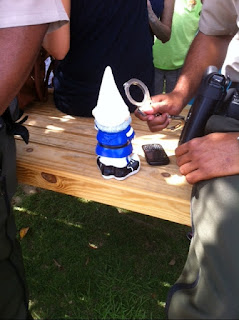 Thankfully, Keith and Andy showed up right in time, and talked the pigs, er, I mean police, out of handcuffing me.  I was very relived and thankful for that! 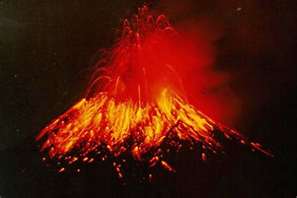 We decided to lay low for a while and have some lunch.  Keith said something about getting off the police department's radar, so we went to a restaurant on Bourbon Street.  We were discussing the events of the day, and how excited we were about the big Kentucky-Louisville game being played later that evening when tragedy struck.

I was sitting in the middle of the table with several of my human friends all around me when out of the corner of my eye I saw three men dressed in red running towards me.  The next thing I know, the first man in red had grabbed me and was running with me out of the restaurant!  I screamed, "Helllp!"

My friends ran after the men trying to save me, but it was too late.  I had been gnomenapped. I was shoved into a pocket so I couldn't see where I was being taken.  When I was taken back out of the pocket, I was thrust into an elevator with these brutes in Red, who were high-fiveing each other and screaming.  I am telling you the truth when I say ol' Tuck was scared to death.

I didn't know what was going to happen to me or if I would ever see Keith and Andy or my beloved Magnolia Hill again!  Oh, someone please help me!
Posted by Keith S. at 10:33:00 PM