Today's guest writer is my very own friendly garden gnome, 'Tuck.  He wanted to share his recent adventure to New Orleans with you. 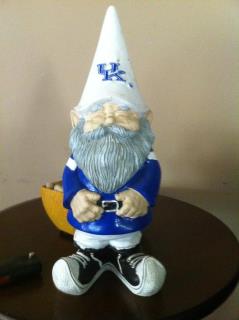 Howdy! My name is Kentucky Redbud Bluegrass Goldenrod Stewart, but my friends call me 'Tuck for short.  I live and work in the garden, yard, and mountainside of Magnolia Hill in Hyden, Kentucky.  My day is usually filled with inspections of different sorts, making sure all is right and protected here in my small piece of the world.

My greatest two passions are collecting roots that look like Elvis and Kentucky Wildcat basketball, so imagine my surprise when the humans who live on Magnolia Hill with me, Keith and Andy, asked me if I would like to join them on their trip to New Orleans, Louisiana, to watch the University of Kentucky play in the Final Four!  I was happier than a bird with a french fry, and immediately agreed to go!

The humans loaded the car with a seemingly endless supply of bags stuffed with clothes, but I already was wearing my University of Kentucky outfit so I saw no point in taking anything else.  Humans can be so weird about that sort of thing.  I called my cousin, 'Tick, who lives just down the river from me, and he assured me he would watch over Magnolia Hill for me for a few days.  Now 'Tick may have a lot of problems, especially with his dislike for ladybugs and dragonflies, but I knew I could trust him to protect everything for me.

Around midnight, we finally attached two Kentucky flags to the back windows of the car and headed out.  I was so excited, I could not believe I was actually leaving Magnolia Hill for the wide open road and a chance to see my Wildcats win their eighth national championship!


Oh, what fun the road trip was!  We made up cheers and shared them with each other.  The humans taught me this one:

U-G-L-Y
You ain't got no alibi,
You're ugly!
Yeah, yeah
You're ugly!
M-A-M-A
We know how you got that way,
Your mama!
Yeah, yeah
Your mama.
I came up with several ones that we all shouted out to the top of our lungs while driving through Tennessee, Georgia, and Alabama.  For some reason, though, when I shared my favorite cheer, it wasn't received very well.  The cheer simply goes:
Louisville, Louisville
Don't be blue,
Tinkerbell was a fairy, too!
Apparently, in Keith and Andy's world, the word fairy means something entirely different than in my gnome world.  I just personally do not like fairies, especially Tinkerbell.  I think she is stuck on herself and has gotten above her raising, but anyway, I apologized and we continued on our road trip and pretended that incident never happened.
I learned so many things on the drive.  For instance, I now know what a gas station is and how to put gas into a car.
I also learned that plants and flowers growing at the places called gas stations have an oily film coating and do not taste very good at all.
Once we crossed the state line into Louisiana, we blew the horn and I led us all in the C-A-T-S cheer.  We had driven all night, so we stopped for breakfast at a restaurant called the Cracker Barrel.  Keith asked the hostess for a table for four and one gnome.  I was so offended when the hostess left me a children's menu.  Can you believe the audacity of her?!  Could she not see my grey beard?  I told her I was older than her grandmother and that I hoped dandelions overtook her entire front yard.  That may have been a little harsh, but I had been up all night long and was a little cranky.  The coffee, however, hit the spot, as did the piece of biscuit and dollop of gravy I woofed down.
I took a long rest on one of the rocking chairs outside the restaurant while the humans shopped a little in the store.  I needed to breathe in some fresh air.  Although it was fresh, it smelled and tasted funny and I got a little homesick for my own sweet air at Magnolia Hill, but that didn't last very long once I reminded myself that I was on my way to the Final Four to see my beloved Wildcats!
After breakfast, we piled back into the car and laid rubber for New Orleans!  I was going to row down my window and yell something as we went across Lake Pontchartrain, because I happen to know several trolls living in and around the bridge there, but as soon as I rowed the back window down, the UK flag that was attached flew out and directly into the windshield of the car behind us.  I was so embarrassed I didn't know what to do, but Keith was nice and just had me ride in the front seat with him the rest of the way into the city.
We had arrived in New Orleans! Part two tomorrow.
Posted by Keith S. at 11:21:00 PM