Vanderbilt University likes to think of itself as an Ivy League school living in the South.  I have been more than happy to allow them to think that over the years.  After all, the biggest contribution the school gives to the Southeastern Conference is a boost to the overall grade point average of the conference athletes each semester.

However, when a basketball team like the #1 ranked University of Kentucky comes to town for a game, bringing with it ESPN's Game Day telecast, apparently all that book-learning they have in Nashville marches right out the door, and is replaced with emotions and fears for which the South is widely known: homophobia, ignorance, and shallowness.

Here is a picture of the shirt that the Vanderbilt fans have decided is best to wear for today's nationally televised game: 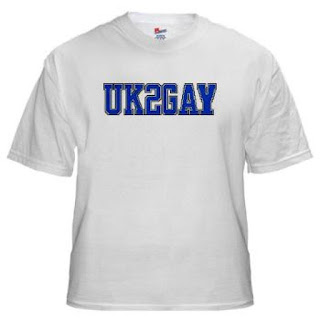 I understand there are tons of other shirts that say lots of things about rival teams.  UK fans wear shirts stating Tennessee fans are ugly and only ugly girls go to Duke.  Taunting the enemy is part of the fun of sports.  I get it, however, calling someone ugly is an actual insult.  What is not acceptable is using the term "gay" as an insult. By using that word, you are saying that being gay is wrong and bad and shameful.  That is not right.


Vanderbilt, part of the enlightened academic elite? I hardly think so.
Posted by Keith S. at 11:24:00 AM