A few weeks have gone by since the Great Middle School Trip of 2011, and I have had time to reflect and possibly reconsider some of my earlier comments, especially Evil Nancy. Yeah, right! Whatever.  I would not change a word.  I do, however, have a few updates regarding the adventure. 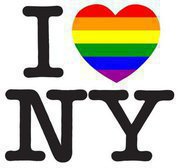 Just a few mere weeks after being in the Big Apple, the state of New York legalizes same-sex marriage.  Coincidence? Perhaps.  But, oh how I wish I could have asked Evil Nancy to stand as my witness as I married my partner right there on her tour bus!  Of course, for the reception, the champagne would have had to be served in small bottles with screw-top lids, and I would imagine the dancing would have rivaled anything seen in any Zumba class.

More importantly, this next update is a sad one.  It is with great regret that I tell you that my Chinatown purchase was a complete and total flop.  Sure, I knew that paying $40.00 for a Louis Vuitton signature messenger bag was a big indication that it was not the real thing.  The plastic wrap it was covered in when I purchased it on the steps of a church after having been ushered far away from any foot traffic by a frantic Chinese lady was another indicator that it was perhaps an illegal knock-off.  But, it looked good.  It looked like a LV. I was going to be stylin' with my laptop in that bag.  Imagine how much better my writing would be if I used such an accessory to hold my instrument?  Makes you shiver, doesn't it?

The bag's debut came last weekend at the Mountain Heritage Literary Festival.  The Festival is a weekend-long event featuring readings and workshops from leading Appalachian writers and artists.  It is a time to make new contacts and friends, expose yourself to new work, and hopefully, expose others to your own work.  I was extremely nervous attending, but at least I had a nice looking bag to hold my items, and that alone gave me some confidence.  This confidence lasted until the second hour of the conference.  That is when the Louis Vuitton strap broke off.  Broke completely off.  It wasn't even stitched, it just looked like it was stitched.  It had just been glued down, apparently with some old Elmer's School Glue.  I was humiliated.  My messenger bag went immediately from an awesome way to carry my laptop to a sad clutch purse.  Not having brought an alternate bag, I had to use the clutch for the remainder of the weekend.  I am sure that made quite an impression among my fellow writers.  Stupid bag/clutch.

Finally, I would like to end with a few pictures of some of the great people who shared this adventure to New York with me.  Many of them were lucky enough to have been on the cool bus, Bus #1, and for that, I am still jealous.


Although I was blamed for this picture, I had nothing to do with taking it.  This is my niece, her friend Breanna, and a guy who I am sure is a very nice and smart young man who just happens to be shirtless and working as a model:


Again, I had nothing to do with this picture, but really, you take a group of 13-14 year old boys on a trip, then call me when you look at your pictures: 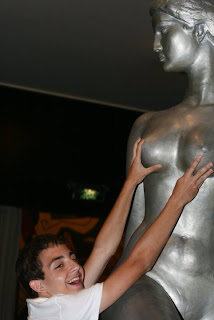 This is poor Merlene, before she almost lost a toe in one of the "circular door incidents." 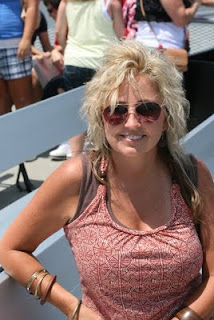 The last time any of us saw Traci Gay-Brashear she was trying on that hat the Rockette is wearing in this picture (the Rockette is on the right).  We suspect Mrs. Brashear-Dear will be making her Radio City Music Hall debut this winter in the Rockette's Christmas Spectacular. 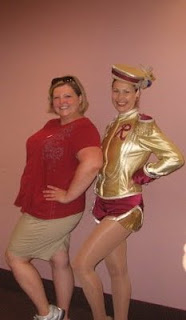 It is no wonder, really, that the girl in the middle of this photo ran slap-dab into a pane of glass thinking it was an open door in Little Italy.  She probably was wearing those those sunglasses at the time. 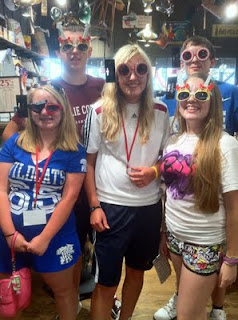 This dude was really raking in some serious cheddar, yo.  I am considering a sign of my own to hold at the Hazard Flea Market on Saturday. 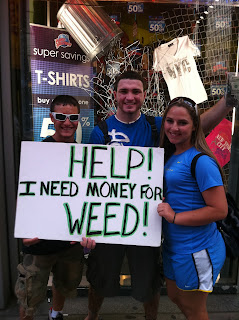