For the past few months, I have been lucky enough to narrate a few of my stories for a radio show called "Keep Hearing Voices." 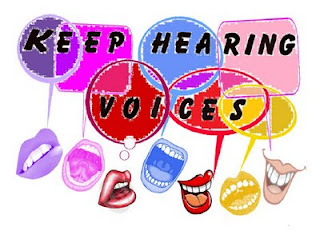 The show is on a local Louisville radio station, 1650 AM Crescent Hill Radio.  In case anyone is interested in hearing some of the past episodes, you can click on the link here and they are all archived on the website.  Keep Hearing Voices  If you want to listen "live," then tune into your computer at 12:00 Noon on Saturday morning.  I tune in via my computer all throughout the week because there are a lot of different great shows and music available there.  I highly recommend you check it out.

But, let's focus back on me. :-)  Keep Hearing Voices is a show that is based on the idea that no one voice is any better than anyone else.  Different writers share their stories, different bands and songwriters share their songs.  It is very eclectic, funny, strange, and awesome.  My segment is called A Strong Man's Cup of Tea, of course.  But for the past few weeks, my friend Marie (the show's host) and I have been scheming a new segment.  The end result of this scheming will debut this Saturday on the show.  It is called Re-Telling It Like It Is.  The concept of the show works this way.  Because I will shamelessly tell any embarrassing story that has happened to me, I sometimes forget that others are not as comfortable sharing their not-so-great moments.  So what these people can now do is send an email to Marie at the radio station describing their embarrassing moment, and I will take it and run with it. I do not share the person's name on the air (if they don't want it to be shared), and I will then re-tell the story as I think it should have happened, maybe adding a little flair here and there.

This concept has been such fun, I thought I would try it as an occasional bit on my blog.  If any of you readers have an embarrassing moment  you would like to share, feel free to email me at astrongmanscupoftea@gmail.com.  Let me know if you want it spruced up or told as is, and if you want your name used or not, and I will help you come out the embarassment closet!

To start this idea on my blog, I am going to share with you a little something that happened very recently to a good friend of mine.  He, his kids, and his parents were fortunate enough to head to Houston, Texas, for the NCAA Final Four a few weeks ago.  My friend had read my blog post about my riding in a car as my aging parents drove, and the resulting fear that sank down deep inside of me.  He is the same age as I am, and so he was now experiencing the same thing.  The biggest difference, however, is that he was experiencing his aging father's driving in the multi-lane interstates of America's fourth largest city, and not the Daniel Boone Parkway.

What follows are actual texts I received from him:

April 2, 2011 12:53
Keith,  My God. I am shotgun with Dad in a rental car going 90 mph toward downtown Houston.  Mom is backseat screaming at me.  She apparently thinks I know the layout of Houston, and is expecting me to give directions to Dad.

April 2, 2011 1:03
AT&T has just called mother in the backseat.  There is obviously an ongoing fight she is waging with them because she is livid.  Apparently, she and Dad have separate accounts and she pays them both with one check.  AT&T has credited the entire check to Dad's account and is showing her account as delinquent and Dad's with a credit balance.  Mom just called someone a #$^%@~!((.  I am not sure if she is talking to Dad or AT&T.

April 2, 2011 1:06
Dad can not read any of the road signs and keeps mentioning it.  He seems very proud of his driving skills coupled with no vision.

April 2, 2011 1:09
I have now been reprimanded from the back seat for not helping the driver read the road signs.

April 2, 2011 1:10
I swear we are on two wheels, merging with four more lanes of traffic.  Mom insisted on sitting in the back seat, but it will be my fault if I don't see the sign for the exit to the stadium or when we sideswipe someone.

April 2, 2011 1:12
My texts are becoming more frazzled now as we break record speed limits.  No kidding.  I think he is pumped that his driving is so good despite the fact he can not see "a blank thing" he proudly says.

April 2, 2011 1:15
Mom is now mad because while she was on the phone with AT&T she forgot to look for Gilley's, and Dad just told her that it burned down 20 years ago.  ARHH Braskeslam!

April 2, 2011 1:17
My child just asked from the backseat how much money a marine biologist makes. How is he blocking this all out?!

If you want to share with me, email me at astrongmanscupoftea@gmail.com, and leave me a comment to let me know if you would like to see more or less of this bit.