Is That A Chicken Leg In Your Pocket Or Are You Just Happy To See Me? 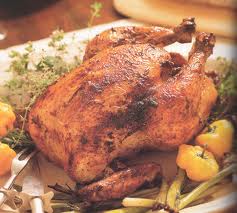 I love chicken the way a fat girl loves Ranch dressing. I love to experiment with new ways to prepare everyone's favorite white meat.  Just last night, I stuffed chicken breasts with goat cheese, sun-dried tomatoes, and basil.  Had it not been for the small kitchen fire that Andy had to extinguish (I kid you not, yet another use for Kosher salt), I'm sure it would have been a fabulous meal.  Fried chicken is one of my top 10 food favorites, and if it is prepared by my Mama Stewart, the dish moves easily into the top 3.

Despite this love for plump and juicy poultry, I do not think that I would ever desire it so much that I would steal it from a grocery store.  If I had a hankering for chicken but had only, say, pork chops in the fridge or some ground beef in the freezer, AND I had no money, I am confident that I could fight the urge to taste a chicken leg and go with one of the items I already had available to me.  Perhaps, this disqualifies me from being a true chicken addict.

What's a chicken addict, you ask?  It is a person who will do whatever he or she has to do to get a fix.  Whether it be a wing, neck, or the prized breast, an addict can not fight the Evil Chicken Demon when he comes calling, and the thing about the Evil Chicken Demon is that you just never know when he will show up with his bucket of desire.


One of these mysterious chicken addicts was uncovered this week in Louisville, on Sunday afternoon right in the middle of the Valu Market.  According to the police report, the CA (Chicken Addict) stuffed four pounds of chicken down his shorts and tried to casually walk out of the store.  The problem was, however, four pounds of anything stuffed down your shorts will start to tug and pull at said shorts.  Before long, CA's shorts had fallen down past his knees, but he kept walking.  I suppose when you are hooked on the junk, you do not care that you are flashing an entirely different type of bird to people as long as you get your four-pound chicken fix.  The thought of, oh I don't know, maybe using a hand to hold up your shorts doesn't come to you.

The CA was confronted by store employees , and the police were called to the scene.  It was mentioned that  the CA smelled of alcohol, but I am guessing that he had probably doused his bloomers with some sort of chicken marinade, probably one with a wine base, and that is what people were smelling.

Nonetheless, the CA was taken into custody and will probably serve a term at the Yum! Chicken Rehab Clinic.  It is not clear what became of the four pounds of chicken, but the thought of it makes me want to reconsider vegetarianism.