Lyrics from "Why Shouldn't We" written by Mary Chapin-Carpenter:

God is all around, Buddha's at the gate,
Allah hears our prayers,
It's not too late.

I bet you did not know that I am a miracle child.  Being born and bred in the remote hills of Southeastern Kentucky, somehow I was raised in neither the Pentacostal church nor the Southern Baptist.  I was one of the few, strange Presbyterians that were known to roam about the hills and hollers.  There were, and still are, three Presbyterian churches in Leslie County, and the collective active membership of all three is probably around 150 people, hardly enough to field to a men's league softball team or buy a church van and drive slowly in the passing lane of I-75 on the way to a youth rally in Central Kentucky.  But, the Presbyterians have played a major role in the history of the county, and they ain't going anywhere.

Presbyterian services are fairly formal services, full of rituals and congregational responses.  They are not full of musicians and instruments.  Central Presby always had a pianist, and on very special occasions, an organist.  That was it.  Horns? Nu-uh. Gituars? Whaaat?!  Percussion and tamborines?  Now you are just talking crazy!  I can not speak for the other Presbyterian churches in the county, but Central Presbyterian was also chock-full of horrid singers.  The piano could sometimes drown out the bad singing, but most of the time it was just plain bad.  Had a Pentacostal been visiting our church and heard the sounds, I am sure she would have left heartbroken at what we had done to a perfectly good hymn.

But, that was what I grew up with, it was what I knew, it was how I expressed my gratitude to the Lord.  Jumping and shouting, loud music, encouraging individual participation in a service made me nervous.  I was sure it probably made God nervous, too.  So, when I moved to Florida, I decided I would find my comfort zone in the good ol' Presbyterian Church.

The first church I attended was the Maitland Presbyterian Church, in Orlando, FL.  It was a huge church, full of nice, welcoming people.  I sat in the approximate center of the church, in the middle of a pew.  During the service, the pastor read from the Bible.  After finishing the verse, she looked up and said, "This is the word of the Lord."  At my home church in Hyden, the congregation always responded to the phrase "this is the word of the Lord" with "Thanks be to God" said in unison.  Naturally, I assumed that this Presbyterian church was no different, so after hearing, "This is the word of the Lord,"  I enthusiastically said, "THANKS BE TO GOD!"  However, as I belted out the words, I realized that no one else was saying it.  I was in the direct center of about 300 people, screaming "THANKS BE TO GOD" for no apparent reason.  Drawing this sort of attention to yourself in a Presbyterian church is a cardinal sin.  We do it together or we don't do it at all.  People were staring from all angles.  I noticed the little old lady beside me scoot away from me.  I tried to explain to no one in particular that I was new this week and that is what we said at my church, but the service was moving on, and people were trying to ignore me.

As I have gotten older, my ideas of religion and church have evolved and changed.  I no longer seek out a church that is only Presbyterian, although I am still a member of Central.  In fact, I honestly believe that you can find the Higher Power by seeking it in places other than actual churches, for example,  I can be spiritually moved in nature very easily.  Meditation is another very effective way to tap into a higher plane.

I was lucky to find the Central Christian Church in Lexington, KY.  Both Andy and I were openly accepted and welcomed.  It was progressive and had a lot of the rituals that made it Presbyterianish enough for me.  Of the many differences in returning to a town such as Hyden from Lexington, finding a suitable place to worship is probably the most difficult for me.  I will not attend a church that does not welcome both my partner and myself or one that does not think men and women are equals.  If there are any readers who may know of a church both Andy and I would be accepted, please let me know.  Until then, I will seek refuge on my own.

THANKS BE TO GOD! 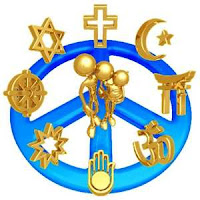