Using Body Hair As A Weapon

Tonight, I just have a quick note on a current event that has been in the news this week.  I am a caring blogger who wishes to not only entertain you, but also to inform you!

The Man Who Was Forced To Eat His Beard 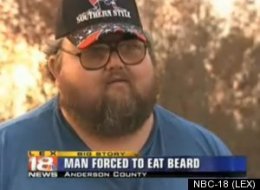 Have you seen this?!  When I first saw it, I actually thought I was being punked.  Surely, this was some new show on television that pretended to be a newscast but actually was a comedy.  But, no, there was the news anchor trying with all his might and professionalism to keep a straight face and not burst out laughing as he read the story.

If you haven't heard or read about this, a feller named Harvey down in Lawrenceburg was trying to sell his lawnmower to his friends (I use the term friends loosely because friends don't make friends eat beards) James and Troy.  The negotiations were apparently heated and the good ol' boys started arguing.  Harvey said, "one thing led to another, and before I knew it, there were knives and guns and everything just went haywire."  By "haywire," Harvey means that James and Troy cut off his beard, which I am guessing must have been long and flowing a la ZZ Top, and then stuffed it into his mouth and forced him to eat.

Now I ask you, WHO DOES THIS?!  What kind of mind has the thought that making someone eat his own body hair is a good fight tactic?  I could understand if you were negotiating the price of a lawnmower and the haggling turned into a fight with the biblical Samson that cutting his hair off may be a good move.  Really, that is the only instance I can think of that would call for cutting off someone's hair.  From the picture, Harvey looks like a pretty stout feller, so I am also thinking that either Jason and Troy used a stun gun or a taser before chopping off his manly locks and forcing them down his throat.

Further, let's just say, for the sake of arguement, that I did decide to cut off someone's hair and make him eat it in a fight, would beard hair be the best choice?  I think if you are fighting with someone and you are at the point of making him eat his own body hair that pubic hair is the logical choice for eating.  Pubic hair has everything you need when making someone eat body hair in a fight.  It adds a layer of disgust that beard hair can not deliver while basically having the same texture as and difficulty in swallowing that facial hair offers.  Back hair could also be a viable option, but probably too hard to harvest in the heat of battle.  Then, I am speaking hypothetically.  Jason and Troy may have used both pubic and back hair in their previous fights and found that beard hair is the best option.  Who am I to mess with that?

I am particularly proud that (a) these good ol' boys have brought such pride to our state and that (b) when the television crew came for the interview Harvey decided it best to wear his "Southern Style" ball cap which is covered with the Confederate flag.  I do not know why stereotypes exist.  Just because the only news story from Kentucky that has made national news this week was about a man in a Confederate flag hat who had gotten in an arguement with his friends over a lawnmover and had his beard cut off and was forced to eat it doesn't really mean anything.

But, just in case it does, and I get into a fight with some of my friends, Andy, Glenn, Doug, and Jeff better be happy they are bald and clean-shaven.
Posted by Keith S. at 7:58:00 PM