Stop Playing With Your Partial Or You Will Go Blind

Thank you to all of you who have responded to my last blog with support.  I really appreciate it, and it means a lot to be able to share that experience and know that there are people out there who care. 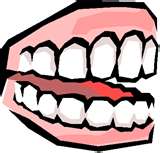 As a result of my bashing, I had to have extensive dental work, and it took months before I was able to get the implants I have now for my two front teeth.  In the interim, the dentist gave me a partial that was, by far, the ugliest set of false teeth ever made.  The only teeth I had ended up actually losing were the front two, so the partial was a full plastic piece that fit into the top of my mouth with two front teeth attached to it.  It always reminded me of a cartoon rabbit's teeth.

I soon realized why older people with dentures "click" their false teeth.  It is both fun and addictive.  By using my tongue, I could snap the piece in and out of place in my mouth.  I don't pretend to have the answer to why this is fun to someone with dentures, but it is, and I did it a lot.  Too much actually.

During this period of time, I was teaching college accounting classes at Sullivan University in Lexington.  Having to go stand in front of a group of 25 students while wearing my new false teeth was tough enough, but my new lisp that I felt I had with the falsies and my addiction to playing with my partial had me on edge beyond belief.  Before going to class, I would slather the plastic with Fix-O-Dent, a glue substance that adheres dentures to your mouth.  Although the directions only called for a drop or two, I would cover the piece completely.  I would not have my front teeth go flying out of my mouth while explaining debits and credits.

This system worked well during the term, and my partial never moved.  What I did not realize I was doing, however, was still trying to use my tongue to play with the partial.  It had become an addiction and I was doing it subconsciously.

The evening classes at Sullivan are 3.5 hours long and meet one time per week.  In these classes, it is common to lecture, give a quiz, and return and review homework all in one night.  In one particular class I was giving a quiz after my lecture, then returning mid-term exams.  While I was waiting for the students to complete the quiz, I was bored and started playing with my partial.  I felt a funny snap, and immediately ran my tongue over the piece.  It appeared that everything was intact, so I didn't worry.  After I returned the mid-term exams, I allowed let anyone who made a C or higher leave class early, and gave the option to the rest of the class to stay and review the test and take another quiz to help them earn enough points to at least pass the mid-term (yes, I like to think I am a cool, hip accounting prof).

Fifteen students remained with me as I started working the problems from the exam on the board.  I was trying to be very specific and very clear how to do the work, when suddenly I felt a tuft of wind.  I felt the tuft of wind blowing through a gap in my mouth.  It was then I noticed that one of my false front teeth had snapped out of partial and had somehow lodged itself on my sweater.  That had been the snap noise I had heard!  My tongue had pushed out one of the teeth!  I still thank my guardian angel for the mere fact that I was writing on the board at the time and my back was turned to the class.  I had an instant panic attack, and stopped talking in mid sentence.  As my Uncle Ed used to say, I didn't know if I should shit or go blind.  I stood still, hoping that if I didn't move or make a sound the students would think class was over and get up leave, but seeing as how we were on problem #1 from the exam, that was not likely.  Eventually, one of the students said, "Um, Mr. Stewart, are you OK?"  I did the only thing I could do.  I picked my tooth off my sweater, put my hand over my mouth, and ran out the door.

I ran down the hallway to the restroom to assess the damage.  After calming myself down, I could see that it had been a clean break.  The false tooth had cleanly broken from the plastic.  Damn my addiction to playing with my partial!  I finally decided that I could try to glue it back with the Fix-O-Dent.  The only problem was that my Fix-O-Dent was in my bag in the back in the classroom.  There was really no choice, I ran back down the hall, ran back into the room, grabbed a large tube from my bag, and ran back out, ignoring the questions of the students.  As I headed out the door, I did hear one of them say to another, "That looked like a tube of hemorrhoid cream."

Back in the bathroom, I successfully Fix-O-Dented my tooth back to the plastic.  How long it would hold, I had no idea.  I just wanted to get the heck out of there.  I went back to class and told that the students that I did not, in fact, have hemorrhoids, but I was having dental issues.  That confused them even more and led to more questions.  Finally, to make them shut up and leave I told them to take their tests, rework the missed questions, and I would give them a passing grade.  I just wanted out before the minty fresh hold wore off.

I finally got home that evening with my both teeth in tact.  I had made it!  The kitchen smelled wonderful, and I asked Andy what he was making for dinner.  I don't remember anything after he said, "Corn on the cob."
Posted by Keith S. at 5:14:00 PM