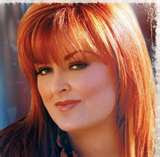 I have never hidden my love for Wynonna Judd.  I have flown my Wy Flag for the world to see since I was mere boy.  Her voice is unmistakable, incomparable, and just downright big.  Hers is the type of voice that really needs no microphone.  It could fill an arena with its pure and distinct sound with no help from electronics.  I remember hearing  "Had A Dream (for the Heart)"  on the radio in the mid-80's and thinking that I really digged that voice.  By the time "Mama He's Crazy" was released, I was.  I was crazy in love with a red-headed woman named Wynonna.

While in college at Transylvania, I will be the first to admit that I did try to minimize my quirkiness in a youth-driven need to be accepted and fit in with kids from larger cities.  I was willing to conform in most every way, except for my love of country music, in particular Wyonner (my pet name for her, I'm sure she'd like it).  To my surprise, my high-falutin' Transy friends also loved Wynonna!  Well, maybe love is a strong word, but they at least put up with my border-line obsession with her.  Thankfully, I found a fraternity brother who harbored an unhealthy fascination with Wynonner's sister, Ashley Judd.  Together, we were able to sit in our dorm rooms and plot elaborate plans on how best to meet and become best friends with the Judd girls.  Sometimes, we would drive across town to the campus of the University of Kentucky in hopes of catching Ashley, who was attending UK at the time, walking to class or sitting outside her sorority house.  Other times, we would just plan out what we would say during the dinner party that was an inevitable part of our collective future, each taking turns being Wynonna and Ashley in the conversations.

It was for Wy that I slept outside of Rupp Arena on a bitterly cold winter night along with my friends Elizabeth Wilkinson, David Spiggle, and Kelly Martin.  These were pre-internet days, and in order to get the very best seats at a concert, sleeping outside and waiting for the ticket window to open was your best shot at being up close and personal for a show.  We were rewarded with seats very close to the stage.  This was the Judds Farewell Tour, and I was already very emotional.  David and I waited for just the right moment, during a lull in the noise and while Wynonna was facing us, we stood up and yelled in unison, "WE LOVE YOU, WYNONNA!!"  She smiled and pointed at us.  At the sight of Wynonna acknowledging us, we both fell back into our seats hugging each other and crying like little girls.  It was by far the #1 Wynonna Moment in my life, and one of my more embarrassing moments during my Transy years.

As I graduated college, like most everyone else, I set goals for myself and planned my future.  My number one goal to meet Wynonna, thus becoming best friends and probably living with her.  As it turned out, it took longer than my original five year plan, but the seed had been planted.  Nothing would stop me!

Because she has been such a part of my life, I am making her blog entry a two-parter.  Tune in tomorrow for the conclusion of Meeting My Idol!

Also, if you have lived under a rock for the past 25 years and have never heard Wynonna, or need a refresher of why she is a legend, here are a couple of You Tube videos: