Although my ultimate life goal after college was to meet Wynonna and become her new BFF, I pretended to have interest in other things in my life, such as career, relationships, and family.

I always keep a close eye on what was happening with Wynonner, being surprised how much our lives mirrored each others. Wy and I are close in age, so we sort of grew up together. We both made the same coming of age mistakes. I could be awkward and gumpy and say the wrong things, so could she.  I got married and divorced, for obvious reasons (gay). She got married and divorced, for obvious country music star reasons (he dated an under-age girl). Then this happened to Wynonna:

When she was arrested for DUI, I thought about how lucky I am to have never been arrested for some of the idiotic things I have done.  Plus, as if I needed even more reasons to love this woman, look at her mug shot!  She is smiling and arching her eyebrows as if she is saying, "Yeah, I'm bad.  You caught me this time, Po-Po, but you won't catch me again."
As the years went by, I went to every concert I could go to but was never able to get front-row or backstage.  All that changed on Friday, September 24, 2010.  Andy and I had tickets to see Wynonner, and he was happily pretending to be just as excited about it as I was.  We were having a pre-concert cocktail waiting for our friend Doug to join us when the phone call came.  Doug called to say he was running late, but he had a surprise.  His partner Glenn had pulled some strings and gotten us not only backstage, but also on the list for the MEET AND GREET!  The next 10 minutes or so of my life is completely blank.  I think I blacked out.  I know I hyper-ventilated.  It was finally going to happen!  Glenn then phoned, and when I answered, the first words out of his mouth were, "Do NOT embarrass me."  I assured him that I wouldn't, and that I did, indeed, know exactly what songs Wynonna actually sang (please see the Bernadette Peters post in this blog for explanation).
We connected with Doug at the theatre, and were ushered backstage.  As we stood in the room waiting for my Wynonna to arrive, I was a nervous wreck.  I was babbling and extremely worried about what I would say to her.  I'd had no time to prepare, and I always like to have something prepared when meeting a celebrity (again, see the Bernadette Peters story for further explanation).  Andy finally told me that if I did not immediately calm down, he was going to perform a full-on-straight-out-of-a-movie slap in the face.  The tone of his voice and look on his face told me he was serious, so I started using my inside voice and tried to focus on breathing normally and not laughing hysterically.
I pulled myself together and started sizing up bunch of yahoos that were in the group with us.  I needed to be Wy's favorite person in this meet and greet.  I needed to be memorable in order to win her over and become her best friend.  Most of the group were sadly ordinary and I was sure I could outshine them.  It was at this point that I noticed an adult man who was mentally-challenged﻿ standing in the room.  Apparently, he was just as excited as I was to be here meeting Wynonna.  He was going to be a problem.  The advantage he had over me was evident.  He had no filter on his giddiness.  He was screaming "Wynonna!" to anyone who would look at him, and hugging strangers because he was getting to meet Wy.  Was anyone in his group threatening a full-on-straight-out-of-a-movie slap in the face to him?  Nooo.  He was free to express himself .  He was acting exactly the way I wanted to act.  It was just unfair.
The handlers then lined us up in the order we would meet Wynonna.  I was vying for a good position, and my last second decision was to go last.  By being last, she would not feel so rushed, and I would have some extra time to spend chatting with her.  I was sure that after hearing my witty opening line she would be enamoured and would be thinking to herself, "I love this guy!  I hope he tells me another story!"  The handler asked if we minded if she placed someone in front of us in line.  We said that of course we didn't mind.  I had not noticed that the exuberant man was still wondering around outside of the line yelling, "Wynonna!"  She then explained that right before it was our turn, we would need to let him in line first.  I was horrified.  How could I compete with an exuberant mentally-challenged adult male who was a big fan?!  Panic set in immediately.  I was sweating profusely.
Then it happened. WYNONNA walked in the room!!  I gasped at the sight.  Then, the man who was to go in front of me in line started jumping and screaming and yelling, "Wynonna!!! Wynonna!!!"  He then broke all the rules and ran over to her and gave her a big bear hug.  Her bodyguards started to leap into action, but Wynonna was so gracious and unfettered.  She waved off the guards saying, "It's OK, it's OK."  She then talked to him and was so very gracious.  My heart just melted.  He then pulled out a drawing he had made for Wynonna.  I know at this point I should be saying "awww" like everyone else in the room, but all I could think was, "Aw, Hell, I should have drawn her a picture.  Now, he was going to be the most memorable person in the group."  Shit.  I regrouped and decided I would not let this deter me from making a good impression.
Suddenly, it was Andy's turn to meet her!  He had given this meeting no thought whatsoever.  I was just hoping he didn't mess up and call her Naomi.  He was, of course, charming and said proper things.  He told her what a tiny thing she is (very true, petite) and then hugged her.  Wy already had her microphone pack strapped on and it was placed on her lower back under her shirt.  When Andy felt it, he asked her if she was packing heat.  She just giggled and was quite delightful. 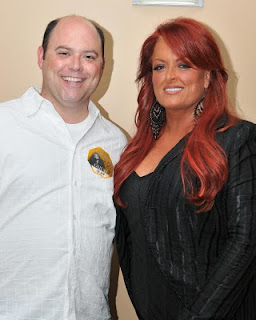 Our friend Doug was next to go.  I have no memory of what he said to her because I was busy trying to not faint and making sure I had no food stuck between my teeth. 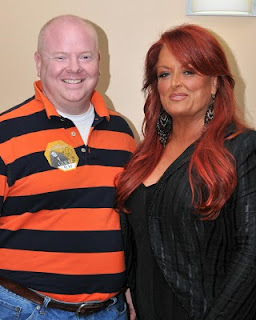 The moment had arrived!  Over 20 years of wanting and waiting led up to this moment!  I walked over to her and hugged her.  Tears came to my eyes, then nothing.  Nothing was in my head.  I could think of nothing to say.  Maybe I was mesmerized by her wonderful eyes or transfixed by her body glitter.  Finally, I stammered out at the speed of ninety words per second, "Oh Wynonna, I have waited all my life to meet you so that I could say something witty to you and you would love me and want to be my best friend and have me come to your house and have supper with you but now that I am finally here and you are finally here I can't think of a thing to say to you."  She just hugged me again and sweetly said that as soon as I left this room she was sure that I would remember everything that I had planned to say.  And just like that, it was over. 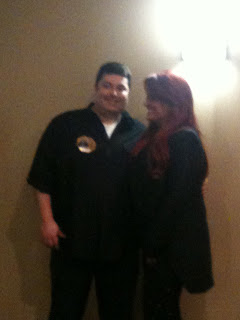 I felt more of a sense of relief afterward.  Although I was out-shined by the other guy, I had finally met her.  We may not have become friends tonight, but I was sure I would visit with her again.  It was just a step on our journey together, me and Wynonner, and after seeing the compassion, grace, humility, and genuine friendliness she showed during this meet and greet made me sure that I had, indeed, chosen the right person to be my hero.
Posted by Keith S. at 10:20:00 PM