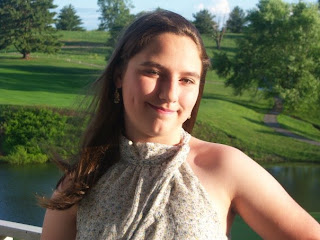 I am perfectly fine with The Dark Cloud that follows me around.  I have learned to adjust and live with it.  For example, I know that I should never, ever bungee jump, sky dive, or ride a roller coaster.  I know my limitations, and live accordingly.  What I am not fine with is the fear that this Dark Cloud is somehow genetic.  One of the Crazy Cousins has just as many stories from freak accidents as I do, and I suppose I will eventually share her stories as well, if allowed.  While I do not have children, I do have two nieces and a nephew that I think of as mine own.  I am terribly afraid that this mixture of jacked-up DNA that my family shares has infected my oldest niece Haley.


Haley is 13 and has already had her fair share of what my family calls "Keith-isms."  Just last month while on vacation with her family, Haley went to play putt-putt golf.  There were three different courses to choose from at this particular miniature golf course.  Haley's group chose Course #2.  After three holes, Haley noticed that a sign at the tee-off for the particular hole read "Par 3."  She immediately began to worry that she and her family had somehow gotten off-course and had ended up on Course #3.  She began trying to make her group stop playing and search for the correct course.  All the others, naturally, knew they were on the correct path, and just wanted to hit the ball into the clown's mouth.  But Haley, being just like her Uncle Keith, was sure that they had somehow gotten crossed up and ended up on the wrong course.  She was sure they should be across the way trying to land the ball in the teddy bear's belly button.  I can only assume that Haley thought that the putt-putt police would show up and escort her and the group off to putt-putt jail, because that is what I would have thought.  Finally, someone finally explained to Haley that Par 3 meant that it should take three hits of the ball to land it into the mouth of Bozo, and that she was indeed on the correct course.
Last year, on another family vacation, Haley was sent to get ice from the ice maker at the hotel.  The machine charged .25 cents for a bucket's worth of ice (we only stay at the swankiest places, obviously).  Haley headed to the floor that had the pay-for-ice-machine, and once there noticed a large crowd of people were gathered in the hallway beside the vending area.  They seemed to just be chatting, perhaps waiting on someone.  Haley walked past them and placed her quarter into the machine.  As the machine started cranking and dispensing ice, Haley realized that she had no bucket with her.  Ice started shooting out of the machine at great speed and making lots of noise.  Haley could only try and cradle her arms to catch the ice as it made a huge mess on the floor.  Needless to say, the group of people chatting looked at her as if she were crazy and made their way to the elevator.  Haley was left to try and get her arm full of ice back to the room alone.  It finally got so cold, she just dumped it out on the floor and went back to the room for another quarter and the bucket.

Finally, while watching the evening news one night, there was a report on the ongoing illegal immigration debate.  The reporter explained that over 100,000 people had to leave the country the previous month because their visas had expired.  Haley was outraged and horrified.  She asked, "Why did those people have to leave the United States?"  "Because their visa had expired." her grandmother replied.  Haley then said she had no idea that keeping an active credit card meant so much in this country.  She could not believe that just because they had not renewed or let their Visa card expire, they were forced to leave the country.  Surely, there was someone to write about this injustice!

So you can see why I am now afraid that the Dark Cloud has been genetically passed to my niece.  She is showing all the symptoms of this chronic ailment and there is nothing that can be done to stop it.  She will have to learn some the things the hard way, but hopefully I can steer her clear of gun firing ranges, power tools, and anything with a sharp edge.