Don't You Throw That Mojo On Me

The next few days of our Las Vegas vacation were pretty much repeats of the first, with the exception of being hit on by prostitutes.  Thankfully, that only happened on the first day.  Our luck did not get any better.  I could not even win a free turn on a slot machine, my cousins were busting on the blackjack table, and Andy's new friend Agnes, from the Red Hat Society Club of Topeka, Kansas, had cut him loose and ended their friendship because she thought he was bad luck.

On the final afternoon in town, Andy and I decided the safest thing to do would be to nap.  You can not lose money napping.  We were just settling in for a midday rest when the hotel room telephone rang.  I answered and it was one of the crazy cousins, JoAnn.  She told me to meet her and my other cousin Delores in the main lobby immediately.  I told Andy I would be back shortly and headed out to the lobby.  Once there, I was handed a bloody mary and whisked into a waiting taxi cab.  We sat in the back seat of the car, and the driver waited for instructions.  "Uh, Buddy," said JoAnn to the driver, "we need to get off this damn strip and go somewhere we can win a little."  Our driver, who did not have one vowel in his entire name, spoke very little English, and when that English was mixed with a southern Appalachian accent, was clueless as to what was being said.  He started driving around aimlessly.

JoAnn, Delores and I sipped our cocktails and discussed our situation.  We had all three lost way more money that we had intended to lose, and WAY WAY more money than our spouses knew.  We determined that it all boiled down to one thing:  we had lost our mojo.  We were not sure what the cause of this mojo loss was, but we were pretty sure it had something to do with the other people who had come on this trip with us (our partners).  All that we could do at this point was try and not blame them and to regain our mojo and salvage the trip.

Our grandfather's brother, our great uncle Henry, lived and worked in Las Vegas for many years.  In fact, he had even worked at a casino during his residence there.  The problem was none of us knew which casino.  It was decided that we should call someone to ask the name of the casino that had employed him.  By going to that casino, the family connection would restore our mojo and we would be on our way to redemption.  For some reason, the cousins thought mother would be the best person to call.  I was not about to call her slightly buzzed from the back seat of a taxi in Las Vegas, so Delores finally agreed to do it.  She couldn't resist starting the conversation by saying, "Ronnie Carol, we are here in Las Vegas and have lost all our money.  Will you send us enough to get home?"  Click.  Mother hung up on us.  Delores called back and finally asked the question, but of course, mom had no idea where Uncle Henry had worked, but was sure it was not a good idea for the three of us to be off the main strip and in some less desirable part of Las Vegas.  As mom demanded Deleros to hand the phone to Ackml, the driver, so she could tell him to take us back to our hotel, Delores said the connection was bad and hung up.

JoAnn again yelled at Ackml in the front seat, "Listen Brother, we have lost our mojo and we need to get it back.  Take us to some casino that we can get our mojo back right now!"  A few blocks later, we pushed out of the taxi in front of a fairly nice looking casino.  We wandered in and started playing the slots, getting the "lay of the land."  Finally Delores asked JoAnn and me if we noticed anything about the other patrons.  We did not, so she told us to look again.  It then became clear that we were the only non-Asian people in the casino.  Not only were they all Asian, but they were all extremely short.  We towered over these people.  I am not sure what Ackml thought mojo was, but I think he thought he came from the Far East. 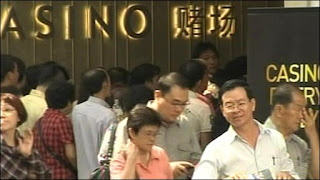 Towering above everyone else in the casino empowered us; we were braver and more confident than normal.  The casino also served much stronger drinks than those on the strip so we decided to stay.  We also thought that since we were so much bigger than everyone else, we could possibly stage a holdup if we got desperate for money.  Because we were feeling invincible, we decided to play the dice game craps.  The other patrons seemed to be very polite and quiet and kept to themselves.  We, on the other hand, were not.  Before anyone rolled the dice on the table, Delores insisted on chanting, "ROLL-ER ROLL-ER HE'S OUR MAN, IF HE CAN'T DO IT, NOBODY CAN."  Our accents were in full force and we were talking and laughing and having a good time.  Anytime someone asked where we were from we would reply, "De-Troit."  The person would look oddly confused and smile and walk away.

Eventually, the pit boss, who was a Taiwanese man standing about 4'8'' started giving us the eye.  We decided it was time to go, much to the relief of the short Asians.  We had indeed regained our mojo and had won back some of our losses.  We called a cab and headed back to the Strip.

We did not realize we had been gone from the hotel for 5 hours or we would have called someone to let them know we were OK.  But as soon as our spouses all started trying to ask questions, we told them that we did what we had to do in order get our mojo back and that they should be grateful since it was their fault that we lost it in the first place.