The Answer is blowing in the Wind


It has been a week or so since my last "questionable" subject, aka grey pubes.  I figure that was long enough between subjects that may offend others.  If anyone knows me at all, they know that the subjects that fascinate me the most are the ones that are often taboo.  I absolutely love to see someone doing something out of the ordinary or to discuss something that causes most of society to cringe.  Call it a quirk, call it crazy, but just make sure to call me before you talk about it.

If I have said it once, I have said it a million times, a well placed whoopie cushion can provide an endless supply of laughter at other people's expense, which really, is the best kind of laughter.  There is a song from the Broadway muscial Avenue Q called "Schadenfreude."  Schadenfruede is gloating at somebody else's bad luck,  or malicious and smug pleasure taken in somebody else's misfortune.  Now, don't get me wrong, I do not condone laughing at and making fun of truly bad things, for instance murder or any other serious crime, bankruptcy, or true misfortune, but seeing someone pitch down the sidewalk from a good trip or possibly fall down a small flight of stairs, that is funny stuff.

The only thing better than laughing at people punked by a whoopie cushion is laughing at people who are actually caught letting the "air flow" naturally.  I, myself, have never been a public pooter.  I know  many men who let it rip whenever the urge strikes.  I have heard horror stories of fathers who, on family trips, would lock all the windows in a car, let his air flow, and nearly choke his wife and children to death from the fumes.  In college, I had fraternity brothers who would have contests for the smelliest, loudest, or wettest versions.  These types of gas passes are not as funny as the one's that happen to people when they are unwanted or unexpected, such as these.

As I said, I have never been a public pooter.  If I am in public, I will excuse myself to the restroom to do whatever business I need to do.  Even at home, if there is anyone else around, I will not relieve myself in the presence of others, including my dogs, Duke and Dudley.  Although, neither Duke nor Dudley appreciate this or return the favor.  As long as I am conscious, I am very proper and gasless.  However, from reports I have been given by the person who shares a bed with me, once my eyes close, my Ambien kicks in, and my dreams begin, the first thing my anus does is send a message out to the rest of my body that says, "Release the Kracken!"  just like Zeus in the movie Clash of the Titans.  In my case, I suppose it would be Cracken.  Alledgedly, I can put on quite a symphony, with my poots covering the entire musical scale.  I say alledgedly because the only time this happens is when I am fast asleep and totally and completely unconscious.  I was originally appalled by this revelation, but aside from living the life of a hermit, what else could I do about it?  I forced myself to suck it up and let it flow.  If I am loved, my partner will have to live through it.  I have suggested he get a C-Pap machine that covers his face and provides fresh oxgyen throughout the night.  I am very thoughtful that way.

My friend Louise knows someone named John who owned and operated a general store in Hyden.  One day, an older lady came in to buy some fabric for her sewing.  She told John she needed three feet of the fabric.  As he measured out the fabric, a strong urge overcame him.  His gaseous breakfast was knock, knock, knocking on heavens door.  He absolutely could not wait a second longer.  He decided that when he jerked the fabric across the ribbed ruler that would cut the fabric from the bolt, he would let his gas fly hoping that the sound of the tearing fabric would cover the natural sound he was about to make.  He badly miscalculated the ferocity of his need, and the sound emanating from his back side roared over the sound of the ripping fabric.  Embarrassed, John looked at the elderly lady not quite knowing what to say.  She simply smiled and said, "Lord, John, that fabric sounded awfully stout, you better rip me another yard of that."


One of my crazy cousins started off her new year living up to her resolution to work out regularly and stay in shape.  She started going to the gym every day and working out on the cardio machines.  One of her Christmas gifts that year was a brand new iPod, so she loaded it up with great, fast beat music to help her walk briskly and keep her heart rate up.  On the Monday of her second week of working out at the gym, she found the only open treadmill was in the center of the treadmill isle.  She hopped on, turned on her tunes, and started walking.  With her headphones on, she could only hear her music, she could not hear any outside noises.  She didn't hear the other machines beside her, the televisions playing, the grunts and moans from the people being punished by personal trainers.  In that cocoon, she forgot that it was all one-sided, although she could not hear anything from anyone else, everyone else could hear her.  Having forgotten this, the brisk walking apparently worked up (or down) some of the gas that was a result of her new healthy, fiber rich diet.  Since, she thought, no one could hear her, she let herself toot away.  It was after her third release that she noticed the horror on the faces of her treadmill neighbors.  In fact, several had gotten off their machines and left completely.  Realizing her mistake, she went ahead and finished her five miles as if nothing had happened, got off the machine, left the building and drove to the next closest gym and signed up for a new membership there. 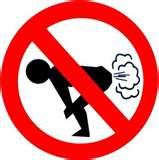 I have one more instance of Gas Gone Wild but involves my mother, and she has strictly forbidden me from sharing on the blog.  Because I am currently visiting her in her home, eating dinners she makes for me, I will abstain from sharing it with you now, but as soon as I am back home in Lexington and can work in into another story, all bets are off!
So here is to the people who fight the urge, but lose.  Rest assured, there are people like me around just waiting to hear that sound, to see that look on your face, and laugh hysterically at you!
Posted by Keith S. at 10:31:00 PM