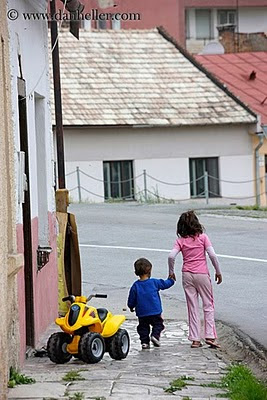 The fact that I found a grey hair "down there" and told everyone about it almost has put my sister at her wits end.  Until recently, she usually rolled with the flow of whatever came from the blog, but this seemed to push her over the edge.  She can not fathom that I would share that information with anyone, let alone everyone.  My mother, on the other hand, had a reaction of, "Eh, what can you do?"  I think she has resigned herself to my oddities and just hopes that all of you know that she did the best could with me, and it is out of her hands now.  But, not Sis.  Sis, being older than me by three years, has always tried to tell me exactly what to do and how I should be doing it.  Apparently, she is thinking this is still going to work.  Looking back over the years, she has good reason to believe it will.

Growing up, every time we would get a good soaking rain that would leave mud holes, or the potential for mud, my sister would take a couple of my mother's pie pans and make mud pies.  She always seemed to do this when I was not around.  She would then call for me to come to whatever section of our yard she was in, and tell me to look at what mom had made for us.  Sis would be filthy, her hands caked in mud, her clothes brown, her hair even sporting mud.  But the pies, the pies would be beautiful.  They looked as if they were made of pure Jello chocolate pudding.  Somehow, my sister would have spread the mud evenly, making sure not get any twigs, rocks, or bugs in it.  "Mom made us these pies and told me bring them outside so we could eat them," she would say.  Although, I was probably 5, I should have realized that A. my sister was covered in mud that looked just like the pie, B. mom would never send my sister outside with the pies to be served, and C. mom would know I would never eat a piece of pie without a proper pie server, glass plate, and dessert fork.  But somehow, sis used that big sister "magic" and with the promise that it was all legitimate, would tell me to go ahead and scoop a bite up with my fingers.  Feeling naughty, but safe in my sister's promise, I would scoop the pie up with my index and middle finger, similar I imagine to how the Pakistanis eat, and start eating the pie.  Of course, as soon as the mud hit my lips my sister would start howling and laughing, sometimes pushing the entire pie pan of mud into my face.  I would cry, stomp, and chase my sister, but it was no use.  She would have gotten a head start and would be out of my reach.

I am sure anyone could understand an innocent younger brother being tricked by this prank once in his life.  The problem is that my sister had such power over me, that this was a semi-regular game she played.  Every time she said, "No, Keith, I swear I am not lying this time.  This time it really is chocolate," I believed her and ate a scoop of mud.  For years.  Years.

Another instance of this sisterly power is what I call the Malted Milk Ball Affair.  During the years 1974-1977, my mother would give my sister and me a .50 allowance.  This was always spent at the TG&Y department store in downtown Hazard.  Mom would go about her weekly shopping and my sister and I would head to the toy department.  My sister would make sure we first made a quick stop at the candy isle.  There is one type of candy in the world that I hate.  Always have.  Always will.  Malted Milk Balls.  Yuck.  Even changing the name to Whoppers didn't help me like them.  My sister knew this fact and used it against me.  She was favorable to the MMB, in fact, one could say that she loved them.  Using her sisterly powers, each week my sister would convince me to buy a box of MMB with my money.  "No, Keith, these are not the same thing you bought last week.  These are solid chocolate.  You will really like these."  Each and every time she said it, I believed it.  So, I spent my money on candy that she loved and I hated, and she would sashay off to buy herself a toy with her money.  Once home, I would open my box of candy, pop one in my mouth, nearly projectile vomit out the MMB, and give the remaining box to her.  Why neither parent picked up on this trend that went on FOR YEARS, I don't know, but the story does go show the power sis had over me.

But now I am adult with my own blog, and I will not succumb to my bully sister's request that I not share every personal detail about myself.  Heck, I may throw in some of her embarrassing moments just for spite.  So take that, Sis.  You have no power here.  I will continue to be as irreverent and distasteful as I want to be (OK, probably not, because she will probably kill me for writing this, but you get the picture)!!
Posted by Keith S. at 12:53:00 AM